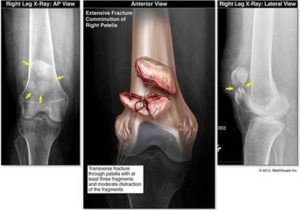 Supermarket cases are seldom known to result in big recoveries. Marsha Alban defied those odds by settling a serious leg fracture for $1,750,000. The case was extensively “worked up”, both as to facts of the accident and to the complicated nature of the injuries which were sustained. The plaintiff, a wonderful woman in her 50’s, was shopping and had just turned a corner when she approached the heavily trafficked front aisle. Ahead of her on her right, she observed a spill and a single cone. As a result, she moved to the left but unfortunately fell onto her knee. She discovered that she had fallen on a red liquid substance about five feet away from where the original spill was located. In several depositions, it was established that the spill came from a 64-ounce bottle. The defendant conceded that the liquid, which caused the plaintiff to fall, came from the original spill several feet away – something, which may seem obvious, but can be a hurdle in cases such as these. The term “splatter” had been used in the store’s accident report, which helped to link the liquid on which the plaintiff fell to the original spill. Finally, Feinberg & Alban PC argued that the placement of the single cone rather than cordoning off an area was insufficient to protect store patrons. In the course of the defendant’s store manager’s two-part deposition, he admitted that “we could have done better, absolutely.”

The plaintiff suffered a severe fractured patella and underwent numerous surgeries. Unfortunately, she developed an infection, which was very painful and required yet another surgery, an irrigation and debridement. However, she has been able to continue working, although the medical experts retained by Feinberg & Alban PC have determined that she will have to retire at age 60, not 65, because of her injuries. Seven medical illustrations were prepared to give meaning to the plaintiff’s ordeal and would have been shown to a jury if a trial were necessitated. It was not, however, and a very favorable conclusion was reached in what is usually thought of as a very difficult case. This case will be featured in the Massachusetts Lawyers Weekly Verdicts & Settlements in a Fall 2012 issue.

“No one protects your rights more fervently”