Jury awards Robert Feinberg’s client $7.7 million including interest as a result of injuries suffered in a boiler explosion. The insurance company only offered $200,000. 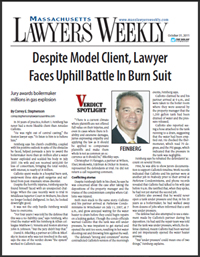 When Feinberg & Alban PC’s client was called to repair a boiler at a condominium complex, he had no idea what danger awaited him. It was the first time there for the 46-year-old repairman, who had been a boilermaker for 20 years. After meticulously checking gauges that indicated the boiler was drained and the pressure released, he began to open the industrial water heater to fix a leaking gasket. The resulting explosion of steam and super-heated hot water severely burned the repairman.

The victim spent three weeks in a hospital burn unit and underwent four surgeries altogether. He sustained extremely painful burns over more than 50 percent of his body. The physical, emotional and mental anguish caused by the way the accident occurred and the severity of the injuries also created symptoms his doctor diagnosed as post traumatic stress disorder (PTSD). He was no longer able to practice his chosen profession as a boiler repairman. His life was irrevocably changed. When the condo’s insurance company offered him $200,000 compensation, he knew it was time to consult a Boston burn injury lawyer.

Preparing the fight for the right to fair compensation

Robert Feinberg, of Feinberg & Alban, PC became involved in the case. He began immediately to gather strong evidence and expert witnesses in support of the client’s case including:

Once all the pertinent facts, witnesses and testimony were compiled, it was clearly shown that the client deserved substantial compensation for the damages this incident caused to the client, his family, and his lifestyle.

Premises liability cases such as this are usually settled out of court. However, it was apparent to the experienced personal injury attorney Robert Feinberg that the only way to gain full and fair compensation for his client was to go to court and present the case before a jury. Judging by the outcome, this was the proper way to represent the client.

A jury in Middlesex Superior Court (Woburn, MA) awarded Robert Feinberg’s client $7.7 million including interest in April 2011 after the painstakingly compiled evidence and testimony convinced them that the condominium owner was liable for the victim’s injuries, pain, and suffering. The jury also provided awards to the victim’s wife and son. The insurance company did not appeal.

No one protects your rights more fervently

At Feinberg & Alban PC, we pursue your claim aggressively. We are relentless advocates for our clients while maintaining a professional and well-respected demeanor. If you or a loved one has been injured, call our personal injury lawyers immediately at 1.800.479.9991 or contact Feinberg & Alban PC online.